Title of the book: Law is a buyer’s market 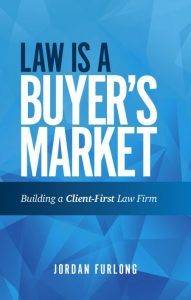 Law firms are experiencing a wrenching period of upheaval. Economic crises, technology, explosions, and a regulatory revolution have spawned a wave of innovative competitors. Newly empowered clients have adopted aggressive buying behaviours and have begun dictating the terms of their relationships to law firms.

Face with this unprecedented competitive landscape and an industry-wide drop in demand for their services, law firms need effective solutions to these existential challenges.

END_OF_DOCUMENT_TOKEN_TO_BE_REPLACED

Title of the book: Death of a law firm 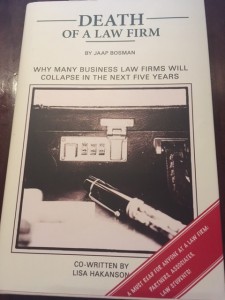 For decades, law firms have had one of the most successful business models around.

The book will argue that now, for the first time in the history, law firms are at an existential cross-road. Taking the wrong direction might very well lead to collapse: the death of a law firm.

This bool carefully dissects the inner workings of the business of law, providing unparalleled insight into what goes on behind the scene

END_OF_DOCUMENT_TOKEN_TO_BE_REPLACED

Title of the conference: Upgrading Justice

Invited by the Harvard University Law School for a conference, Richard Susskind lectured on the future of Justice and legal professional services through three issues :

During his lecture, Richard Susskind discussed the future of justice by inserting it into a context of numerical, economic and societal evolution.

Alternating economic, technological and mathematical demonstrations with anecdotes and humorous winks, Richard Susskind succeeded in approaching the question of the future of justice with singular energy and positivity, far from the ambient pessimism generally surrounding this problem.

Professor Richard Susskind OBE is an author, speaker, and independent adviser to major professional firms and to national governments. His main area of expertise is the future of professional service and, in particular, the way in which the IT and the Internet are changing the work of lawyers. He has worked on legal technology for over 30 years. He lectures internationally, has written many books, and advised on numerous government inquiries. END_OF_DOCUMENT_TOKEN_TO_BE_REPLACED

We use cookies to ensure that we give you the best experience on our website. If you continue to use this site we will assume that you are happy with it.Ok